The western slope of the Azumino valley rises up toward the soaring peaks of the Northern Alps, part of Chubusangaku National Park. Easy access has made these mountains a beloved destination for hikers and other outdoor enthusiasts, who flock here to immerse themselves in the national park’s pristine natural environment. Snow melts early on the nearest peaks, resulting in a long hiking season, and three trailheads lead to a choice of trails, from short, beginner-friendly routes to multiday traverses that require experience and stamina.

Visitors intending to hike the Northern Alps should check prevailing weather and trail conditions and gather as much information as possible before setting out. The local tourist associations are reliable sources of information, as are the local visitor centers. You can hire hiking guides, some of them multilingual, who can make the experience more enjoyable by sharing local customs and manners, route information, safety hints, and knowledge of the natural environment. 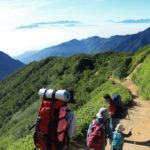 A summer hike in the Alps. Mt. Fuji can be seen in the distance.

By the beginning of May, most of the mountain huts have opened for business and most routes in the area are usually snow-free. While crampons and ice axes may no longer be needed, you should check conditions when making plans. The rainy season lasts for about a month in early summer, and the busy season begins in late July. Even then, however, the weather can be unpredictable; morning climbs are preferable, since afternoon squalls are frequent. After the quiet season from late August and early September, visitor numbers pick up again as people come to see the brilliant hues of autumn foliage, so be prepared for crowded huts and some lines at popular destinations. The huts start to close in mid-October when serious snowfalls begin, and during the winter, only highly experienced mountaineers should attempt hiking or climbing. For a more relaxed experience, avoid visiting during weekends and national holidays.

There are several impressive mountains in the Jonen Range on the Azumino side of Chubusangaku National Park.

The pyramid-shaped Mt. Jonendake is the most recognizable from the east and has become the symbol of the Northern Alps for residents of Azumino and Matsumoto. The patterns left on its slopes by the snowmelt are an important part of local lore: farmers would once gauge planting times by the amount of remaining snow, and residents say the retreating snow on the mountainside sometimes forms the image of a priest named Jonenbo. 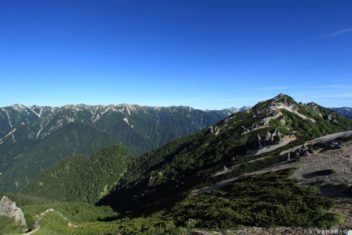 The view from Mt. Tsubakuro

Mt. Chogatake is a graceful mountain offering spectacular views of the Mt. Yari–Mt. Hotaka range to the west and sprawling meadows of summer flowers on its slopes.

Mt. Tsubakuro is at the end of a long, steep ascent, but the mountain is popular with beginners because the trails are well-maintained. Pinnacles of white granite jut out of the ground, and white sands contrast with fields of pink summer flowers known as komakusa.

Mt. Otensho is the highest of this range at 2,922 meters, and the location of a trail junction that crosses over to the western range of Mt. Yarigatake and Mt. Hotaka.

A popular route known as the Northern Alps Panorama Trail follows a ridgeline that runs from north to south, traversing all the main peaks over a three- to four-day hike. The trail is long but well-maintained, and mountain huts are located at convenient distances along the way. This trail offers some of the most magnificent views in the entire national park. To the west loom the rugged silhouettes of the spear-like Mt. Yarigatake and massive Mt. Hotaka. To the east lies the beautiful green expanse of Azumino, and the lights of the valley and Matsumoto city sparkle like jewels after dark.

There are about 100 mountain huts in operation throughout Chubusangaku National Park. Their origins may have been the small shelters built by loggers and hunters in the Edo period (1603–1867), but as mountaineering took off at the beginning of the twentieth century, they began to focus on serving the needs of hikers. By the time the area was designated a national park in 1934, most of today’s mountain huts were already in operation. The Enzanso hut near the peak of Mt. Tsubakuro has been in business since 1921 and is particularly well known for its high-quality accommodations. 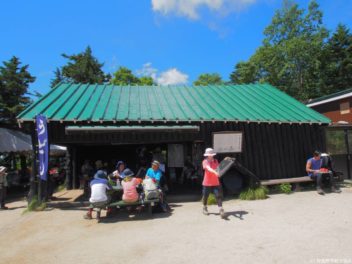 One of many mountain huts in the national park

The huts have deep connections with their alpine locations. The operators and their employees are living encyclopedias who share their knowledge about the natural environment, trails, weather conditions and much more. Most huts have been in the same family for generations, with the operators’ ancestors having laid the trails that hikers still use. They continue to take responsibility for maintenance, replacing washed-out bridges, restoring damaged paths, and cutting back foliage. The huts are often on the front lines when it comes to rescue operations, facilitating communications and, in some cases, supporting adjacent clinics that provide basic medical services.

A hiking guide and detailed map with other information is available online at: https://azumino-e-tabi.net/hike/