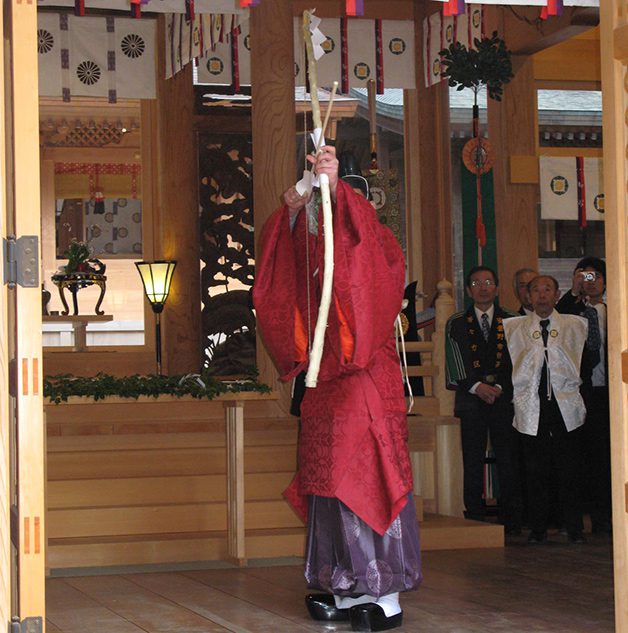 This exciting Shinto ritual started 500 years ago. Twelve Shinto priests shoot twelve arrows to a target to predict whether this year will reap a rich harvest or not by their hitting ratio. Visitors can take broken parts of the holy arrows and the target home, as these pieces serve as prayers for the well-being of one’s family.

Local chorus groups sing spring season songs by the Hotaka River. The second concert by other performers is held at the Azumino Concert Hall located near the monument. Admission is free.

Akashina area has three rivers running through it. Located by the rivers, Ryumonbuchi Park and Ayame Park are famous for over five million irises of 150 varieties. The Iris Festival is held from mid- to late June when the irises start blooming. There are also some other events offered by local groups. You can see irises from mid-June to November.

Over 1,400 enthusiastic participants from 50 groups perform an exciting dance parade called “Yosakoi” on the main street to JR Hotaka Station.

This is the second biggest fireworks show in Nagano.

This festival features decorated, hand-crafted boats from each block of the Hotaka area being paraded through town starting at noon and returning to Hotaka Shrine by 2 p.m. The festival reaches its climax with a clash between the crafted boats.

Every September, the peaceful, shady confines of Hotaka Jinja become the focal point of a lively, two-day festival that draws crowds of spectators. Colorful floats, the largest 12 meters long and 6 meters high and weighing 5 or 6 tons, are pulled through the streets before converging in exuberant clashes at the shrine. September 27, the second day of the festival, is observed as the anniversary of the death of Azumi-clan hero Azumi no Hirafu, who died in battle in the year 663.

Boats in the Mountains

These floats, called ofune (“boats”), are a feature at festivals across the entire Azumino valley. While it is tempting to link these boat-shaped floats to the Azumi clan’s origins as nautical navigators, scholars have found no records that specifically tie the ship-themed celebrations to the ancient seafarers. Still, it is fascinating to wonder if the festivals come from attempts to please the gods by imitating life on the seas.

While the origins are shrouded in mystery, historical records as far back as 1689 reference the ofune and the wood used to make them. The floats are still constructed using traditional materials and intricate building methods. The frames are made of tree branches lashed together over a base of large logs and covered with brightly colored bunting. A stage is constructed on the deck of each ofune, featuring fantastically detailed dioramas of popular historical or legendary scenes. On one, which is displayed at a nearby museum, elaborately armored warriors charge with swords raised high. Horses rear in fright and waves crash against rocks as a battle rages. Another float features a princess surrounded by a forest and other visual props that create a vision of fantasy.

The floats are mounted on large wooden wheels. Lacking steering mechanisms, the massive, heavy structures must be hauled around corners as they are pushed and pulled through the streets.

The Highlight of the Festival

Hotaka Jinja’s festival takes place on September 26 and 27, with the highlight on the second day. Five of the boat-like floats—three “children” and two “adults” (male and female)—are paraded through the streets toward the shrine. After circling the area in front of the main hall, the two adult floats line up facing each other. To the throb of drums and the penetrating tones of flutes played by musicians riding inside the frames, the male and female floats are pushed at high speed, crashing against each other again and again, while the crowd cheers. This dramatic finale may be a reference to sea battles of the past, but it is also symbolic of the act of copulation. Like many festivals in Japan, one of the original purposes is to pray for fertility, both for the community’s fields and its families.

A museum dedicated to the festival is located on the northern side of Hotaka Jinja. Several of the large floats are on display, complete with the dolls and elaborate historical scenes built on top. For those unable to attend the actual festival, the displays and videos of the ceremonies provide a taste of the excitement. The museum features a number of dolls that have been used to decorate floats over the years, allowing visitors to get an up-close look at the detailed work of the doll makers—including some very realistic eyeballs made by local glassmakers.

Festivals in Nearby Areas 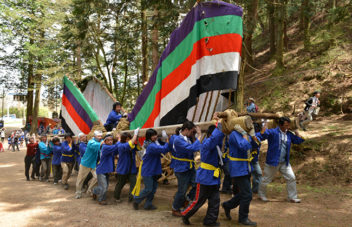 One of the festival boats being paraded

Over 40 other neighborhoods in the Azumino valley host festivals that include parades of similar large, boat-shaped floats decorated with elaborate historical scenes. These events are held in early summer and around the autumn harvest. While there are no clashes between the ofune like the ones at Hotaka Jinja, the sight of these heavy, colorful floats being pulled through the rural landscape to the rhythm of flute-and-drum ensembles (many of them made up of local schoolchildren) is nonetheless an unforgettable experience.