Wasabi is a root known as Japanese horseradish and commonly found in sushi as a paste. Because fresh wasabi is so perishable and expensive, fresh wasabi root is not common for home use. At Daio Wasabi Farm, visitors can taste real fresh wasabi and also get the rare opportunity to see how wasabi is grown on the farm. You can even try wasabi ice cream and wasabi beer.

Refer to Marui Wasabi’s website (Azumino-based wasabi factory. The website has fun wasabi trivia and information about how to enjoy eating wasabi.)

This distinctive spice was relatively unknown outside of Japan just a few decades ago. Now, thanks to global interest in Japanese cuisine, it is part of the culinary vocabulary, served in restaurants and found on shop shelves all over the world. Azumino’s Daio Wasabi Farm is responsible for about 10 percent of Japan’s total wasabi production. Each year, hundreds of thousands of visitors come to learn about the fascinating methods of growing and harvesting wasabi and to sample the many products, from beer to ice cream, in which the plant is used.

The Origins of Wasabi

Wasabi is a pungent green paste served as a condiment with many Japanese dishes, particularly sushi and sashimi. It comes from the thick part of the stem, or rhizome (not the root, a common misconception), of the Wasabia japonica plant, native to Japan. Wasabi’s eye-watering, tongue-tingling effects are powerful but short-lived.
Like other botanicals, wasabi is thought to have first been consumed for its medicinal properties, with records suggesting it was used as far back as the Asuka period (552–645). A book from the Muromachi period (1336–1573) introduced wasabi as a condiment for sashimi, and as such it was a favorite among the wealthy and powerful. By the eighteenth century, it had become a standard accompaniment to the increasingly popular sushi. Cultivation in the Azumino area only began some 140 years ago, around the middle of the Meiji era (1868–1912).

There are two types of wasabi, one grown in fields and the other in water. The latter, known as sawa-wasabi or hon-wasabi, requires very specific water quality and conditions. It grows wild in cold-water streams and can be cultivated only by painstakingly recreating the plant’s ideal conditions: an abundant source of clean water and a relatively constant water temperature. The Azumino wasabi farms were built around springs of pure water from the absorbed snowmelt of the nearby Northern Alps. Shade trees on the banks of the waterways help meet the necessary temperature requirements.
The plant grows steadily with proper care, and despite the drastic changes in seasonal temperatures, can be harvested year-round as long as the water is kept at around 13°C. This is achieved during the hotter months from May to October by hanging porous black cloth over the plants to provide ample shade. 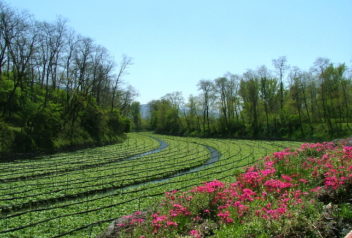 At Azumino’s wasabi farms, the plant is grown both from seeds and seedlings, generally taking around 18 months to reach harvestable size. After picking, almost nothing of the plant goes to waste. The stems and roots are chopped up and used in dishes such as wasabi-zuke, a kind of pickle eaten with rice. But it is the rhizome that is the most desirable part of the plant. Grating or chewing it causes a reaction that creates allyl isothiocyanate, the mustard oil that is largely responsible for the spicy jolt to the tongue and nose when wasabi is eaten. Freshness is important, as the peak effects and flavor last for only about 3 to 15 minutes after grating. 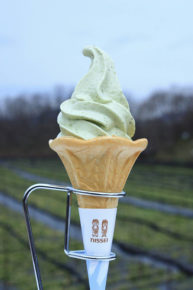 The high-quality wasabi produced by farms in Azumino is sold fresh or used in pastes and powders. Because the plant is so difficult to cultivate, it is still relatively rare and expensive. What many people know as wasabi is actually a mixture diluted with western horseradish, which shares some of the same spicy attributes, but is easier to grow and has a sharper, longer-lasting effect. The amount of actual wasabi in products differs: those marked “hon-wasabi,” or “true” wasabi, include more than 50 percent of the real thing; other products consist mostly of horseradish, green dye, and other additives. Quality-conscious sushi chefs insist on working with the actual rhizomes, grating them to a paste just before serving, so customers can appreciate the natural sweetness along with the pungency. 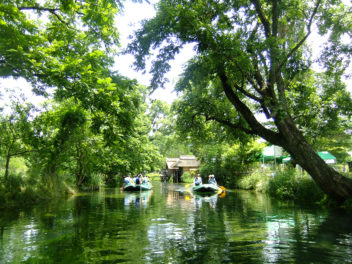 Wasabi was first cultivated in the Azumino area in 1917 at the Daio Wasabi Farm. Over the years, the farm has developed a unique, fan-shaped arrangement of planting in gravel beds that maintains a steady water flow throughout the fields, some of which are over a kilometer in length. The farm is open to visitors, who flock here to wander around the shaded paths, enjoying the cool air from the more than 120,000 tons of spring water that flows through the farm every day. Adjacent to the farm is the site famed film director Akira Kurosawa chose as a location for his 1990 film Dreams, and three watermills that were constructed for the film still sit in a picturesque spot on the water. Visitors can cruise down the nearby river on rafts or glass-bottom boats.

The use of wasabi has expanded into the world of Western cuisine as well, to compliment dishes such as top-quality beef. But the flavor and spicy kick are not the plant’s only pleasing effects. The ancients included wasabi in the Honzo wamyo, a dictionary of medical herbs compiled in the year 918. Today, many people believe that wasabi has antibacterial, anticancer, and anti-inflammatory effects and can be used to slow blood clotting and stimulate bone growth.

Where to Buy Wasabi

A specialty in Nagano prefecture, soba is a thin noodle made from buckwheat flour. Azumino’s handmade soba is highly regarded throughout the region and can be found in many soba restaurants all over Azumino. Served either in hot broth or chilled with a dipping sauce, local soba noodles are fresh and abundant all year round. The best time is the harvest season in autumn when many local soba festivals are held in the region.

Oyaki is a buckwheat or wheat bun specialty even more local to Nagano prefecture than soba. The buns are stuffed with a huge variety of fillings including vegetables or sweet bean paste. The bun is usually cooked by either steaming, grilling after steaming, or roasting in ash. You can get oyaki in many in shops, such as Azumido (Japanese Site) (Tel 0263-71-1400) in Swan Garden near Toyoshina Interchange, and select restaurants throughout Azumino.

Sake is a fermented alcoholic beverage made from rice. In Japanese, the word “sake” is actually a broader term for alcohol, while “nihonshu” specifically refers to Japanese rice-based sake. Sake is served cold, at room temperature, or heated depending on the season, quality of the sake and preference. It is said that good water and good rice make good sake. Azumino sake, which has both elements, is available in local shops and is served in many restaurants. EH-shuzo (Japanese website) (Tel 0263-72-3011) offers a tour, tasting and shopping.